Most of my early life was spent as an inpatient in hospital and if it wasn’t for the care and treatment I have received, I most likely wouldn’t be here to tell my story. My rare disease experience has, however, felt like a never ending rollercoaster. At times it has been extremely disappointing and frustrating. Unfortunately, no underlying cause has yet been found for the issues I have experienced and I currently remain a ‘mystery’.

My journey began before birth as I had intrauterine growth restriction and was born small for gestational age. I was born with a hole in my heart, which was repaired when I was two-years-old. Eating has never been second nature, and I have had a lifelong history of feeding issues; this meant I was sick constantly and I was tube fed for the first five to six years of my life.

Between the ages of five and 16, I attended paediatric endocrinology appointments where I was given growth hormones which dramatically improved my height but not my weight. At 16-years-old I was referred to Child and Adolescent Mental Health Service (CAMHS) as it was suspected I had an eating disorder — despite having been treated for growth related issues for most of my life. It was a real shock to the system being forced to sit in front of food that I severely disliked and being told I could not move from the table until it was finished. My lack of eating was not an intentional behaviour; I had been like this my whole life. During this admission I had very little control over my life and any decisions that were made. My life became a battle between medical and mental health professionals.

In March 2007, I was admitted to hospital where they considered inserting a feeding tube directly into my stomach (known as a PEG tube). However, a psychiatrist from CAMHS instead referred me to a private eating disorder clinic where I spent seven to eight months as an inpatient. Again this was a very bizarre experience for me. I did not feel like I ‘belonged’ there. Also by this point a gastric emptying scan had been performed and confirmed that I had gastroparesis – a condition where the stomach can’t empty itself in the normal way. This was a strong indication that my condition was not related to mental health issues.

After being discharged from the eating disorder clinic, my health declined again. I asked for a PEG tube as I believed that this would be the most appropriate course of action for me to have a reasonable quality of life, however, this was refused. Then in 2008, a psychologist stated that there was no evidence of any eating pathology, weight or shape concerns. Despite attending the GP and begging for help I was admitted to a third eating disorder facility. This was a voluntary admission, however, when I expressed my feelings about wanting to leave they informed me that if I did so then I would be sectioned under the Mental Health Act. This made me feel like a criminal who had been wrongly convicted.

In 2011, I watched a programme called ‘The real life Thumbelina’ which featured a girl with a rare form of dwarfism, Russell-Silver syndrome (RSS), which makes it difficult to gain weight along with other symptoms. I felt like I could identify with many of the symptoms. I consulted with a number of doctors regarding this but no action was taken. Three years later, I viewed my medical records at the hospital and I was astounded when I came across an article within my records relating to RSS. A doctor had suggested that I may have RSS but this was never disclosed to my family. I consequently saw a locum GP and explained my situation and was referred to my local Genetic Service. I was tested for the two main genetic changes associated with RSS but both came back negative. At this point I felt like I was back to square one and it was all over. 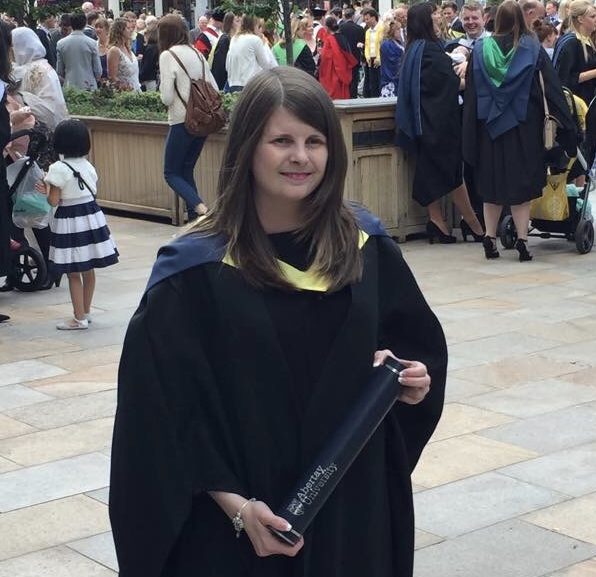 After spending a few weeks in hospital during my third year of university I was offered a PEG tube – despite being refused five years ago. I have had this since July 2014 and this decision has been one of the best; it has made such a massive difference to my life both physically and mentally.

I’m never usually lost for words but it’s hard to find the words to express how I feel about the treatment I have received due to a major lack of understanding of someone with a rare and undiagnosed condition. Unfortunately, there is a lack of coordinated care which makes it very difficult when you have to attend appointments for multiple specialities. The implications of ineffective multi-disciplinary care can have such a detrimental impact on the lives of people like myself and there is a lack of psychotherapy services to deal with this. I hope this is something which is made available in the future.

The last few years have been more positive and productive and I hope that I can use my experience to help others in a similar situation. In recent years I have been diagnosed with gonadal dysgenesis, osteoporosis, joint hyper-mobility syndrome and fibromyalgia. I joined the 100,000 Genomes Project in January 2018 and await results.

For a long time, I’ve been searching for someone like me but so far I’m one of a kind. Raising awareness of rare diseases is important to me because no matter if we are diagnosed or undiagnosed we are all unique which is something we should all be proud of.

For the last 30 years I have had a complex and challenging medical history. I have a BSc in Psychology from Abertay University, Dundee. I enjoy reading (mostly real life stories) and spending time with family and friends. However, my main passion in life is to make the experiences of people like myself more positive.

PrevPreviousLosing your voice in a world that is always talking
NextPatient Empowerment Group: March 2019Next