On behalf of my MdDS family

I’ve noticed a trend on social media sites dedicated to conditions such as Meniere’s and Migraine for people to write letters to these conditions, explaining why they have such a hard time with them – and, sometimes, with their doctors. I have a hard time with Mal de Debarquement Syndrome (MdDS). But my letters would be directly to the various clinicians and other decision-makers involved.

The first would be to the ENT consultant who diagnosed me in 2006, following a classic disembarkation trigger. Amongst other things it would ask “What was the point of writing ‘I would probably advise her not to take vestibular sedatives’ in a letter I wasn’t able to read until I bought my medical record, many years later? You could have just told me at the time.”

To the GP who wrote ‘She knows not to take vestibular medication’ I would say “No, I didn’t. See above.”

To the one who wrote ‘She doesn’t have true rotational vertigo.’ I’d say “I know, I told you that. And I also asked why you kept recording MdDS as ‘vertigo’, to which you replied ‘We always record balance disorders as vertigo.’ Great; a pervading systemic error which might be replicated for patients with perilymph fistulas, SSCD, balance symptoms that result from concussion or strokes, gluten ataxia etc etc. Brilliant – not. Especially when doctors in a hurry then try and do the Epley Manoeuvre on me, which can trigger or hike MdDS symptoms.

To the consultant who told me I was lucky not to have Meniere’s I’d write “I agree, it’s a terrible condition. But – look at the amount of research that gets done about that, compared to MdDS. Also the Meniere’s researches hang out on facebook. So far, ours don’t – although they are very generous when it comes to responding to emails.”

On the left is my wonderful sister who had a-typical MdDS symptoms for two years. We both pray that her daughter (also pictured here) won’t develop MdDS. But if she does, I hope she won’t have to fly to New York for treatment.

To the consultant who failed to copy me in to a letter saying ‘I didn’t mention the possibility of MS’ I’d say “Well I wish you had. I’ve learnt a lot of tricks of the trade from the MS crew, after I spotted the relapse/remission connection and all the overlaps in symptom presentations.”

To all the clinicians who’ve reported on scans etc by writing ‘You’ll be pleased to know we could find no cause that can explain your symptoms’ I’d say “I’m delighted, but since those were ruling-out tests, I’m not surprised. Could you please get a move on and figure out what does cause them so I can work out which treatment might be appropriate – on the off chance that any of the trialled protocols are ever available on these shores.”

To the GP who wrote ‘her symptoms are medically unexplained’ I’d say “That euphemism has dangerous connotations – apparently Prof Wessely gets death threats when he uses it. If you meant ‘It’s unfortunate that, although Charles Darwin’s Dad wrote about this condition, clinicians have only recently started researching it and the full pathology is still unknown’ I would agree with you. Meanwhile the EDS research should tell you everything you need to know about the problems associated with the term ‘medically unexplained’ so please stop using it. Thanks. Same goes for ‘functional’ – having had that label slapped on MdDS by the ‘Sleep Clinic’ I had to go to London to get re-diagnosed before my former GP would take it seriously. Total waste of NHS resources – and mine. Having lost my job through being ‘an uninsurable fall risk’ funds are a bit tight and I didn’t need that extra expense.”

To the benefits agency I’d write “Could you please explain why I was eligible for health benefits in 2010 when the condition was still episodic but, now I’m in the chronic phase, I’m not?”

To the so-called ‘health professional’ who assessed me for PIP I’d write “Your notes were almost entirely inaccurate. They were nearly as bad as the ones in my medical record, which are the reason I now call MdDS ‘Mal de Debacle Syndrome’. It’s par for the course for people with rare conditions to have errors in their medical records but it really didn’t help when your inaccuracies were used by a judge to discredit my claim.”

To my beloved Dad, a retired GP who’s not in the best of health himself (and pushing 90) I say, very often, “Thank you for supporting me financially, Dad. Having a rare condition is notoriously expensive and being able to afford to go to the osteopath helps a lot. Not much left over to go towards fundraising for research but I chip in when I can.” 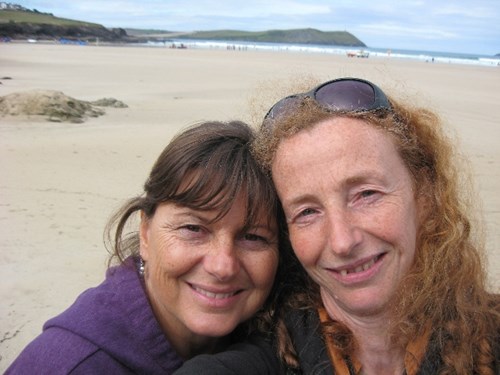 This is me (on the right) with my American cousin-in-law. I’m sad I can’t visit my American family now, but flights are one of my main triggers.

If she wasn’t off sick I’d write the following to my fabulous new GP. “You’re a star – and you’re winning awards right left and centre on our social media sites. I know you can’t cure me but it helps that you’re moving heaven and earth to get me the referrals I need to figure out what made me susceptible to MdDS in the first place. The intel from the cardiologist didn’t help much, I know, since there are no dysautonomia clinics here. But the report from the neural-ophthalmologist was considerably more useful, given how many of us with MdDS also have convergence insufficiencies. By the way, Dr Dai, our opto-kinetic researcher emailed me to say he wasn’t sure of the mechanisms behind vagus nerve stimulation and that it would probably only mask the symptoms (as happens when I use a TENS machine). But, if it won’t do me any long term damage, I’d like to give it a go. Under research trial conditions, of course. Meanwhile I’m looking forward to meeting the genetics team in the Autumn – bit bizarre that I had to schmooze the local Prof at a public lecture to get there, but needs must when ‘the intractable devil’ drives, to quote Dr Dai’s definition of MdDS.”

It’s far more bizarre that to get to my new GP I had to discriminate against her predecessor on the grounds of his gender. That man had the nerve to tell me not to do any more research. Whereas our researchers – and the rare conditions advocates – say the exact opposite.

If many of these issues were not relevant to others with different rare conditions, I might not bother to say or write any of the above. But they are. In just one example I read about a woman with Wilson’s Disease who wrote that ‘bad advice permeated my notes like a virus’ and my heart went out to her in recognition. She also mentioned that clinicians were causing ‘havoc’ in her medical records (through gross inaccuracies) and this resonated with many of us with MdDS too. At one point this poor lady was told she had a ‘conversion disorder’ and that the symptoms were that she’d seen too many doctors whilst trying to get a rational diagnosis. She finally found doctors who were willing to read the information and advice she’d sourced directly from the lead researchers and says she feels very lucky.

I’m in the same position now. But I know of far too many rare conditions patients who are not – including those with MdDS.

So the last letter I’d write would be to a hearing therapist I met last year. She has MdDS too and told me her GP was ‘useless’. It would say, very simply “I hear you.”

Born (1961) and brought up in Yorkshire I moved to Bristol to attend university. I then worked in outplacement before being recruited to the Civil Service. From there I was seconded to The Prince’s Trust and later worked for CLIC, co-ordinating their teenage support group. My last job was in student services at a post 16 centre. I took an MA in 2010 and am now a self-employed writer and teacher. I am also a qualified Laughter Yoga Facilitator : ) With the support of a mentor supplied by Findacure I run a small campaign group for people with MdDS in the UK and also write a guest blog for Findacure under the banner of ‘Treasure the exceptions’