This year the day’s central theme was to recognise the crucial role that patient voice plays in creating change and improving the lives of patients, their families and carers.

We held parliamentary receptions across the UK. Our first reception was held at the Senedd in Wales sponsored by Darren Millar AM. Darren Millar AM welcomed delegates to the event and Alastair Kent OBE, Director of Genetic Alliance UK and Chair of Rare Disease UK (RDUK), informed those in attendance about our new report, ‘The Rare Reality‘. The event included presentations from speakers including Dr Andrea Edwards, Clinical Director of the All Wales Medical Genetics Service, Tony Esmond, a patient affected by Alkaptonuria and Ceri Hughes, mother of Isaac who has the ultra rare condition Moebius Syndrome.

Our second reception was held at Scottish Parliament in Edinburgh. It was hosted by Malcolm Chisholm MSP who welcomed everyone to the event. Keith and Sheelagh Swankie gave a patient perspective on rare diseases, highlighting their experience of Progressive supranuclear palsy and how they would not “bow down to this diagnosis but fight to raise awareness so others do not have to go through what we have”. Alastair Kent OBE spoke of work towards implementing the rare disease plan but highlighted how there was still more to do across the UK. Jamie Hepburn MSP, Minister for Sport, Health Improvement and Mental Health announced a £6m investment in the Scottish Genomes Partnership, after which Professor Zosia Miedzybrodzka spoke about the Scottish Genomes Project and what it means for rare disease patients. 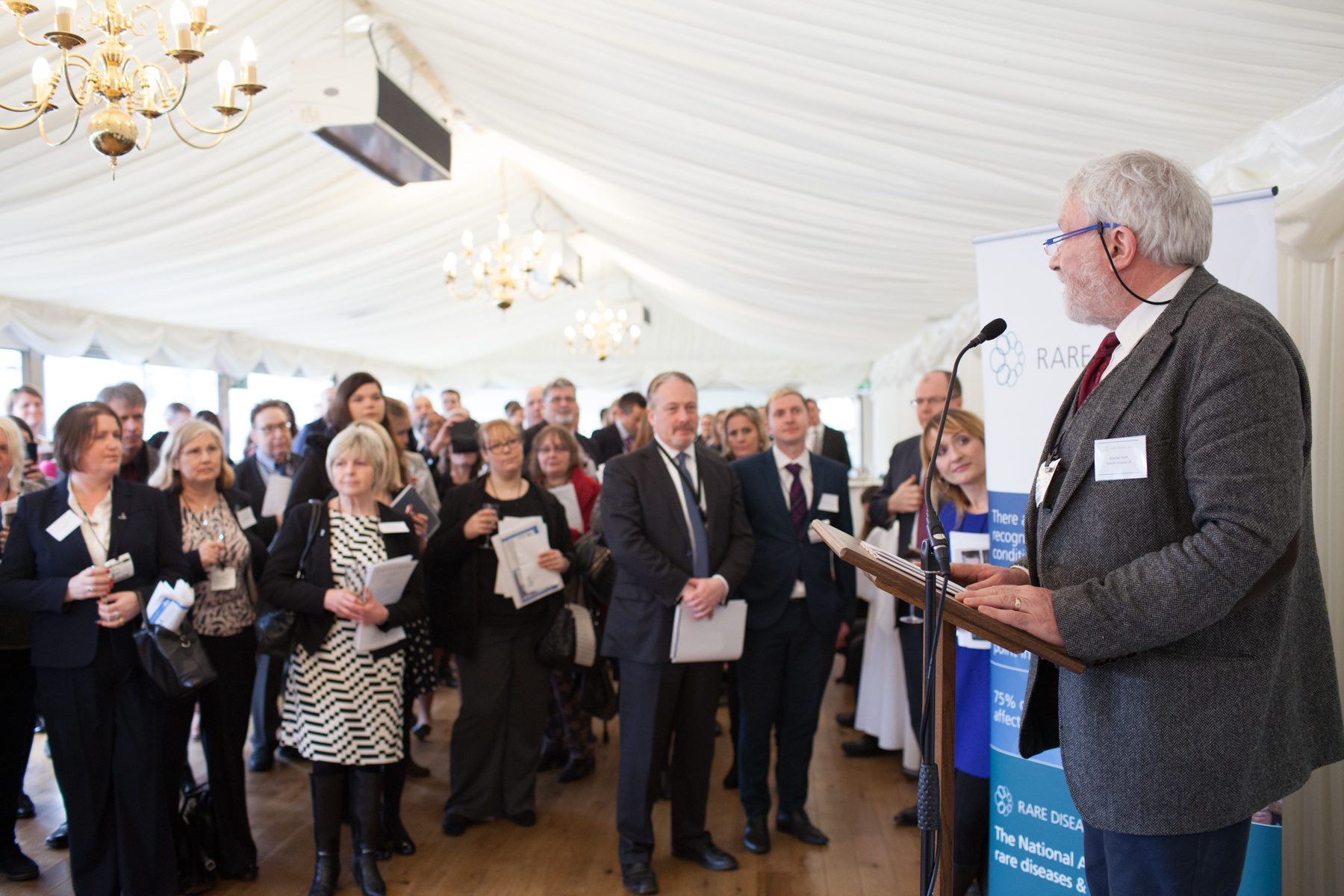 Our Westminster reception was held on Wednesday 2nd March. It was attended by over 150 people, including numerous MPs and Peers. For the fourth time Liz Kendall MP hosted the event. George Freeman MP, Minister for Life Sciences with responsibility for rare disease outlined the work the Department of Health is overseeing for rare disease, including the progress towards the implementation of the UK Strategy for Rare Diseases. Gina Radford, Deputy Chief Medical Officer and Rare Disease Champion spoke about how patient voice has impacted her personally and professionally during her career. Liz Kendall MP noted the importance of both patients and families to patient voice.

At the Westminster reception we presented Lord Walton with a certificate of appreciation for his lifelong dedication and service to the rare disease community. After a short networking break, Fiona Marley from NHS England gave an update on their work in the rare disease arena. Recently elected chair of the All Party Parliamentary Group (APPG) on Rare, Genetic and Undiagnosed Conditions, Ben Howlett MP, spoke about his hopes for the APPG and stated that “APPGs champion issues and I can’t think of an issue more important than this”. Alongside our parliamentary receptions we raised awareness both online and in person at numerous events. We hosted Twitter takeovers, published four patient experience videos, launched our Pledge for Patients campaign in Scotland and Wales as well as supporting the publication of the first progress report on the implementation of the UK Strategy for Rare Diseases by the UK Rare Disease Forum.

To view some of our highlights from Rare Disease Day 2016, please take a look at our Storify.