My son was born two weeks early by elective caesarean. Although there were a few complications at his birth and with his feeding straight after, the doctors thought he was fairly healthy – just small and with talipes (known as ‘club foot’). They told me that he was losing weight because he had feeding problems and that I should just ‘keep trying’. At only one day old, he stopped breathing and after tests, they discovered his blood sugar level was dangerously low.

At four months old, I asked for a second opinion as he had gone from 5lb12oz down to 4lb. He looked so tiny and sickly. I thought he was going to fade away. We went to a new hospital where he was given a computerised tomography (CT) scan. I remember the doctor and a bunch of other people coming to the ward and sitting me down. They told me the devastating news that Samuel’s brain hadn’t developed properly and he was unlikely to survive past three years old. My world came crashing down. Not Samuel, not my little baby. Please, not him.

Every day from then on was a struggle. Feeding took forever but vomiting it all back up took seconds. Milestones were not reached and there was one hospital appointment after the other. The worst thing was that there was no known reason for why this was happening to Samuel. He was undiagnosed.

In 2003, I did some internet research and found SWAN UK, a support network dedicated to helping families with undiagnosed children. I was invited to appear on GMTV by presenter, Fiona Phillips, who was very interested in the plight of undiagnosed children so I asked a member of SWAN UK to appear with us. It was a good show and I hope we managed to spread the word. At this point we had seen a geneticist and started to realise that we weren’t alone and that there were thousands of children with severe disabilities but no known cause. The effect of ‘not knowing’ is devastating to the whole family. You cannot imagine what it feels like to spend every day, for many years, wondering if it is your child’s last!

I am pleased to say that not only did Samuel make it to three years old but he smashed it! He has just had his 20th birthday!

Around five years ago, Samuel’s geneticist, the same one he has had all his life, contacted me to ask if I would be interested in signing Samuel up for some research. The science of genetics is changing and developing all the time and she told me about a study called ‘Deciphering Developmental Disorders’ or the DDD study for short. 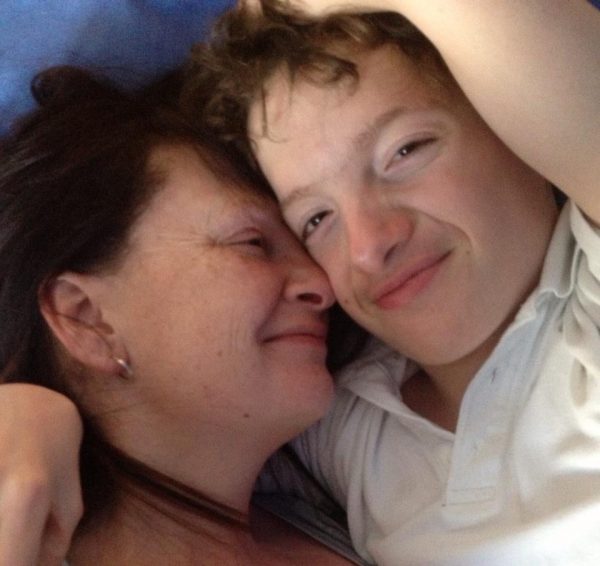 Rather than just testing a particular gene, they had developed a test whereby they could test all the genes and see if anything looked abnormal. The test is very easy and just involved getting saliva samples from Samuel, myself and his father (which was the most difficult part as we have no contact with him normally). I knew the test would take a very long time to be analysed. I was on tenterhooks for about two years!

Then the phone call came from the geneticist ‘you will get a letter but I thought you would like to know – WE FOUND SOMETHING!!’ I couldn’t believe it.

Will this mean that Samuel has a diagnosis and I will know what the future holds?

We made an appointment to go to London to speak at length with the geneticist and Samuel’s neurologist. The gene that had a ‘mis-spelling’ is called ASXL3 and the condition associated with it that Samuel could be officially diagnosed with is called Bainbridge Ropers Syndrome (BRS). At this point, there was not a lot more I could find out. It is such a rare condition that Samuel was only the 12th person in the UK to be diagnosed with it.

I made it my aim to find out as much as I could so I did my own research and found a contact email for Dr Bainbridge. I wrote to him to tell him our story and he gave me details of some research being done into the condition. My next port of call was to search social media and I found someone who believed their daughter had the same condition. She was diagnosed and her Mum decided to set up a Facebook page to see how many other families there were, living with BRS. More and more people started to come forward and join the page. Not only families but therapists and specialists started to show an interest. We all added little stories about our children and posted photos and details of symptoms. The similarities in looks and symptoms was astonishing. Suddenly, I felt we were getting somewhere!

We have been lucky enough to find online communities that have been able to connect us with other families and geneticists so we can find out more about the condition. I was able to attend a conference in New York to further my learning about the condition and what I might expect in the future.

I am so overwhelmed and happy that Samuel is not alone any more. We made new friends and have a new future. For my part, I am going to try and organise a conference in the UK.  It will be a great opportunity to get our BRS family together.

In conclusion, I urge parents and guardians to never give up. One day, there will be no such thing as ‘undiagnosed’! Genetics is constantly changing and every year, something more amazing can be done. I wanted to share a quote that my late father used to favour. He would tell me ‘never say never’. He also used to say  ‘clean your room’ but that’s another story!

I have raised Samuel as a single mum. We have an amazing bond and in September he will be starting at a residential college which caters for his every need and that will give him opportunities that I never thought possible. It is going to be an amazing and worthwhile experience for him but I am going to miss him terribly as we have never been apart for over a week before! I started a website for Samuel so I can raise awareness and share his story, this is currently under maintenance, which will be completed by the end of August 2018.