It was around seven thirty in the morning when I received the news my Grandad had died. I was standing by the store’s alarm system, turning on the 200 hundred or so bright lights and welcoming fifteen staff members for another day of pre-Christmas sales.

My Mum seemed to whisper the news I’d been dreading. All the pain and tears she had faced over the years seemed to have drained her completely. Still, her soft voice was filled with sadness.

‘Grandad passed away this morning Scott’, she said. 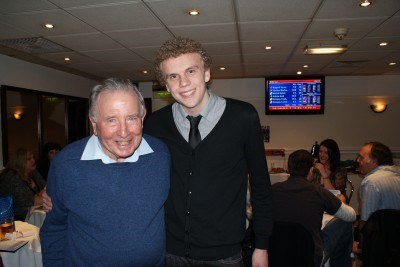 Eddie, my Grandad, was born in 1929 – the year of the Wall Street Crash. Just as the Americans were left to fight their own battle for survival during the Great Depression, our family too was left with more questions than answers.

Friends, family, neighbours and even heath care professionals searched for information about neurological condition: progressive supranuclear palsy (PSP). As we googled, read literature and tried our best to get some knowledge about PSP, the brain degenerative condition just continued to strip Eddie’s ability to live independently for the remaining four years of his life.

What’s rare to you, wasn’t rare for us

Living with PSP leads to difficulties with balance, movement, vision, speech and swallowing. Eddie was one 4,000 people living with PSP in the UK. I remember my mum was repetitively told that PSP was a rare disease. But, you try telling someone they are living with a rare disease. It’s not rare for them, as it is taking over 100% of their life. Rare is something you acknowledge occasionally, not suffer from every moment of your life.

And although ignorance is not an excuse for inferior care, it must be acknowledged that awareness is key for improving the healthcare given to those living with PSP, as it is for all rare diseases.

Therefore, I could try and make a difference. I could remind my family that sharing their experiences will help. I could encourage my mum to setup a local support group. And I did.

Working with the incredible members of the Manchester PSP Group and my friends and family, we developed a simple tool to spread awareness of this rare condition. That tool we created was…a green shoelace. We named it Ed’s Lace.

The idea was that you asked people to buy a green shoelace, swap one of their shoelaces with the green one and cut one end of the shoelace off. Then, over time the shoelace will start to fray. Not in a flash, but gradually. The idea is: the frayed end of the lace depicts the progressive nature of PSP.

We sold a few at our meetings and of course friends and family supported the idea too. But then the amazing PSP Association took the idea onboard and I was honoured to see Ed’s Lace as the face, or should I say lace, for the charity’s Awareness Week in April 2015.

Now, having sold over 4,000 laces and launching the campaign in Parliament, I know Eddie has started countless conversations about PSP. People question why on earth you would have a bright green shoelace wrapped around your best work shoes, tangled in your hair, tied around your bag and even braided as a necklace.

Those questions made PSP that little bit more common. After all, awareness of the condition is what every single person affected by PSP wants.

Though I am sure my Grandad would laugh at the fact a shoelace named after him has been posted around the world, I hope he understands that his pain, his suffering and the abandonment he faced may knot be forced upon as many people living with PSP in the future. 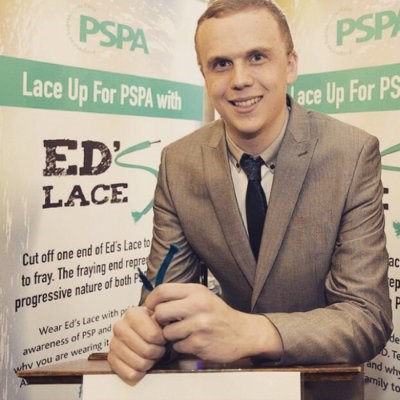 Finally, I urge you all to follow the PSP Association on Twitter, share this blog with a colleague and use the knowledge you have gained of PSP as your ‘fact of the day’ with your family. Even better, buy an Ed’s Lace and let the conversations start themselves!