The week before Nick was diagnosed with myeloma was extremely busy. He was preparing for two Headship interviews and I was revising for my exams to become a barrister. We were bemoaning the fact that life was so hectic.

Then the unexpected happened. 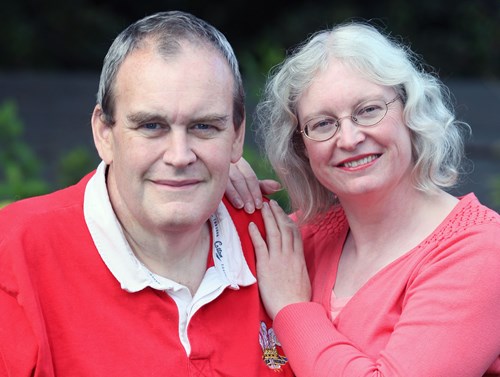 The ‘arthritis’ Nick had been suffering from turned out to be myeloma, an increasingly common, but still rare, cancer of plasma cells. Plasma cells are found in the bone marrow and protect the body against infection. He had to start treatment immediately. Treatment is up to 2 stem cell transplants and a series of chemotherapy treatments. The drugs are often “orphan” drugs.

The Myeloma has damaged Nick’s bones but can also damage the kidneys. Most doctors will only come across one case in their professional life, hence the delay in diagnosis. Myeloma is often missed by GP’s as symptoms resemble arthritis and it occurs mainly in older men. This is a problem because it can often be well managed if caught early. There is as yet no “cure” but I believe doctors are rapidly moving towards describing it as a chronic condition (diabetes, thyroid disorders etc.) rather than a fatal illness. Now, it is being spotted in younger patients and we know women can get it too.

Since Nick’s diagnosis I have attended several functions organised by Rare Disease UK and on 28 February 2011, Rare Disease Day, I spoke at the EURORDIS International Conference “Rare but Equal” on “Unequal access to treatment in the UK”. I have attended meetings with Genetic Alliance UK to work on the UK Strategy for Rare Diseases. Since then I have attended the EURORDIS Summer School in Barcelona in 2015 which focussed on empowering expert patients and helping us to encourage the EU to push drugs for rare diseases through the marketing licence process more efficiently. I have become involved with the Wales Cancer Research Centre and the Welsh Rare Disease Network. I am now hunting for that elusive highly paid legal job. I am not sure that mopping Nick’s brow and scrubbing my bathroom qualify me for much but I have certainly improved my research and advocacy skills over the last few years! 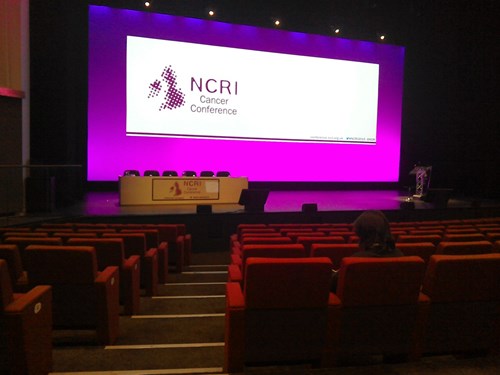 Recently I attended the National Cancer Research Institute’s (NCRI) conference in Liverpool. I was fortunate to be awarded an NCIN bursary to attend. Arriving in Liverpool on Sunday 1 November I wondered where the Liver Birds had gone. Most of the country had disappeared in thick fog. In the BT Convention Centre, however, over 150 speakers were about to shine a very bright light on cancer. I was privileged to have been awarded an National Cancer Intelligence Network (NCIN) bursary to attend the NCRI Conference. I had been advised to “pace myself” but it was difficult to pick which sessions to attend.

My husband has myeloma, a “blood cancer” which is a rare disease. I chose the lectures which mentioned haematology and those which seemed more accessible to a non-scientist. Many speakers mentioned that having input from patients and the public was welcome. The “De-mystifying science” sessions were invaluable even though they started at 08.30.

Harpal Kumar posed the question “Is late diagnosis of cancer real and if so what can we do about it?” This theme ran through the Conference and the answers were “Yes” and “probably quite a lot”. Even more encouraging was a consistent message “Once diagnosed, we can manage, treat and in some cases cure cancer.”

On first opening my Welcome Pack I quickly spotted the Treating Cancer supplement distributed by The Independent. The centre fold was an article about myeloma. I attended a lecture by Christina Remsenthaler on “Symptoms and quality of life in myeloma”. In fact, some speakers mentioned rare diseases and the specific issues which arise when a patient has to spend the first 15 minutes of a 20 minute appointment explaining to his doctor just what his condition actually is… David Weller mentioned that most GP’s encounter only one case of myeloma in their working lives. He stressed that screening programmes and diagnosis pathways can make a crucial difference to early diagnosis in primary care. When a GP hears hooves it isn’t automatically horses, it might occasionally be zebra.

On Wednesday I travelled home through a rather brighter Britain. I was tired from dancing the night away at the dinner and party, but totally energised by the last lecture given by Carl June. We had been warned that T cells and immunotherapy may not be the magic wand we are hoping for, but for some patients who do not respond to conventional chemotherapy the sun is beginning to shine a little more brightly at the end of the tunnel.

Gillian is a member of the rare disease patient network for Wales which brings together patients, families and patient organisations to inform and scrutinise progress with the delivery of the commitments within the Welsh Implementation Plan for Rare Diseases. Gillian spoke about her experiences of caring for her husband who has a rare blood cancer, myeloma at the recent network launch. Gillian is a trustee for Leukaemia CARE.