A riddle: A person or thing that is difficult to understand or explain, a question that has no answer…

Every day for the last five years I have asked ‘somebody’ a question about our little boy and not one person can give me the correct answer. Why? Because Dylan has a rare undiagnosed genetic condition. So rare no doctor has ever come across another person who presents the same. Dylan is simply a five year old little boy living in the body and mind of a nine-month old baby. He presents in every single way the same as a nine-month old baby would, he is the size and mentality of one and is so super cute everyone wants to squeeze him, but internally he is a very sick little boy who has too many health complications, from his head to his toes.

Words make known. But we are living in the Unknown.

Now I am the sort of person who likes to know where I stand. I like to be organised, know exactly what I am dealing with. To be honest I am not even keen on birthday surprises. So you can imagine my shock when at 27-weeks pregnant with Dylan I got told “he’s not growing, he’s getting smaller – oh & he’s got a genetic condition but you won’t find out which or how severe until he is born”. Not the news any parent wants to hear, with such a vague outlook, but especially not for the person who always likes to be in control.

Dylan was born on the 20/08/2010 a small but healthy 2.5kg. So tiny but so perfect. His problems started at ten-days old but it wasn’t until he was eight-weeks old that he was taken into hospital for investigations, then, with blue flashing lights he was moved to a more specific hospital. However, he was then discharged – with all tests showing he was ok…

At five-months old Dylan was again blue-flashing lighted into Great Ormond Street Hospital for Children where we spent almost a month with various different departments investigating Dylan – from Neurology (his head) to Rheumatology (his toes). We got the same answers as before: “all tests come back negative”.

Nothing was wrong with my sick baby. Doctors didn’t think he’d get through this period of time, being so small and sick, but he did, so here I am five-years later, still none the wiser, but now I am much stronger person with the most incredible little boy who has made me this way.

Lots of things are mysteries

But that doesn’t mean there isn’t an answer to them. It’s just that scientists haven’t found them yet.

Having no answers, no label and no name is honestly the most frustrating, upsetting and depressing part of what we have been through. For years I have asked why does he….? When will he…? What if…? Why…? To any Health Professional that will listen. Dylan is under over forty health professionals, from Consultants to Therapists, so that’s a lot of questions to a lot of people.

We have been on genetic studies for over three-years but still have no answers.

I have googled, boy have I googled, I have researched, I’ve read, I’ve wished, I’ve hoped and I’ve prayed but it was only when I discovered SWAN UK (Syndrome Without a Name) that I realised I wasn’t completely alone.

I thought this is it… I will have my answers, I will find lots of children across the country all the same as my little boy. Wrong again, there really isn’t another Dylan in this world, that we are aware of, but instead I found a community of like-minded people, all with the same questions to ask as me. Everyone there has a special undiagnosed child and can feel my pain and reap my rewards. A whole new world opened for us.

Maybe one day we will get an answer?

So now we are five-years on and still have no answers, the only label he has is a ‘SWAN’ which represents a beautiful white bird. It is a label I am happy with. A diagnosis now wouldn’t change a thing. I have learnt it would be so rare and probably have a name like ‘-xy+z deletion’ (*for example) and that it wouldn’t help us.

I have wanted something so much for so long – but all I have really been wanting is a name. It wouldn’t change anything about Dylan, it wouldn’t change the care he requires on a daily basis or the medication he needs – it can’t make him better. Albeit it may give us a more dignified prognosis, but we already know Dylan’s condition is life-limiting and life-threatening and we know we probably won’t have him forever.

Our gorgeous little superboy has already defied doctors and I know in my heart he will continue to do so. A diagnosis may come with definites, we have already been told Dylan won’t sit up – and he can!!! That he won’t crawl – and he can and that he won’t walk – my child will try to, I know that much!!!

‘A diagnosis brings a prognosis’ therefore ‘without a prognosis the world is Dylan’s oyster!’

It’s taken long time to accept, but not having a diagnosis is not the worst part. It’s like buying a tin with no label on, what’s inside is a surprise and it’s even better when the surprise is sweet and yummy – Just like Dylan. 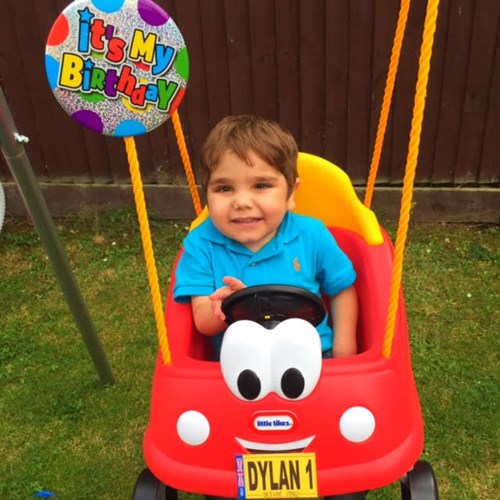