Throughout February 2018 we hosted numerous events and activities to mark Rare Disease Day. Rare Disease Day is officially held on the last day of February each year, and recognised in over 90 countries worldwide. Rare Disease Day is a global event that aims to raise awareness of rare diseases and improve access to treatment and support for those with rare disease. This year’s theme was research. For rare conditions, research contributes to diagnosis, treatments and cures, as well as improved health and social care for patients and families.

On Wednesday 14 February, we held the first of the 2018 Rare Disease Day receptions at the Senedd, Cardiff. This was attended by over 100 members of the rare disease community, which ranged from patients to clinicians to academics. Up to 750,000 people in Wales will be affected by a rare disease at some point in their lives.  The reception highlighted Wales’ proactive position with the UK Strategy for Rare Diseases, most recently producing a refreshed implementation plan in 2017.

There was also a presentation from Sarah, a parent of a son affected by the rare condition Williams Syndrome. Sarah highlighted the importance patient support groups have for families affected by a rare disease.

Bob Doris MP highlighted that one in 17 people will be affected by a rare condition at some point in their lives- seven percent of people in Scotland. He also made reference to the progress Scotland has made with the UK Strategy for Rare Diseases. However, he called for further changes to improve the lives of those affected by rare conditions, and their families.

Rebecca, a parent of a child with a rare condition, outlined the difficulties in achieving a diagnosis for her daughter, and what it meant for her daughter to be only one of 65 patients around the world with 8p inverted duplication/deletion syndrome. She called on policymakers to ensure that people are not lost behind their diagnoses and for greater awareness of rare conditions, not just amongst healthcare professionals, but in the general public also. You can read a copy of Rebecca’s speech here. 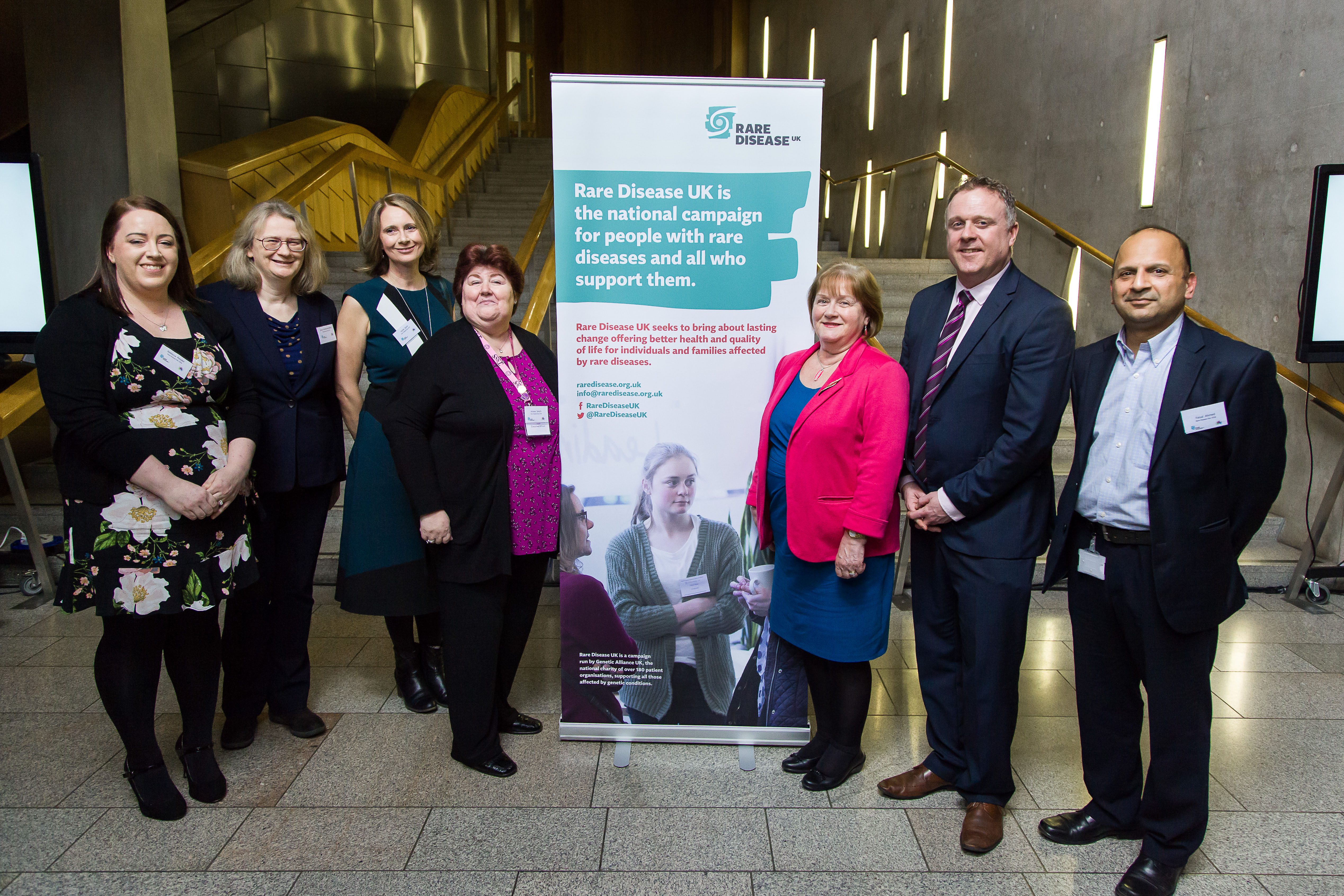 The final of the Rare Disease Day receptions was held on 28 February at the Houses of Parliament, Westminster. The event was hosted by Rt Hon Dame Cheryl Gillan MP, and attended by a variety of patients, parliamentarians and other stakeholders. During the reception there were speeches given by: Parliamentary Under Secretary of State for Health and Social Care, Steve Brine MP, Dr Jayne Spink, and Rt Hon Dame Cheryl Gillan. The event featured the launch of the ‘Understanding Children and Young People’s Experiences’ report by Rare Disease UK, the first report of this kind, featuring the voice of children and young people. The report looks at the experiences of young people with rare conditions, in addition to the impact on their siblings. There was also a presentation by Sabah, a young adult who has survived two forms of rare cancer since the age of one. Sabah outlined the emotional difficulties of dealing with her second diagnosis as a teenager, and now having the ability to understand the impact of a second diagnosis. Tying in with some of the themes of the Understanding Young People’s Experiences report, Sabah mentioned the impact her condition had on her siblings, and how it had brought her family closer together. 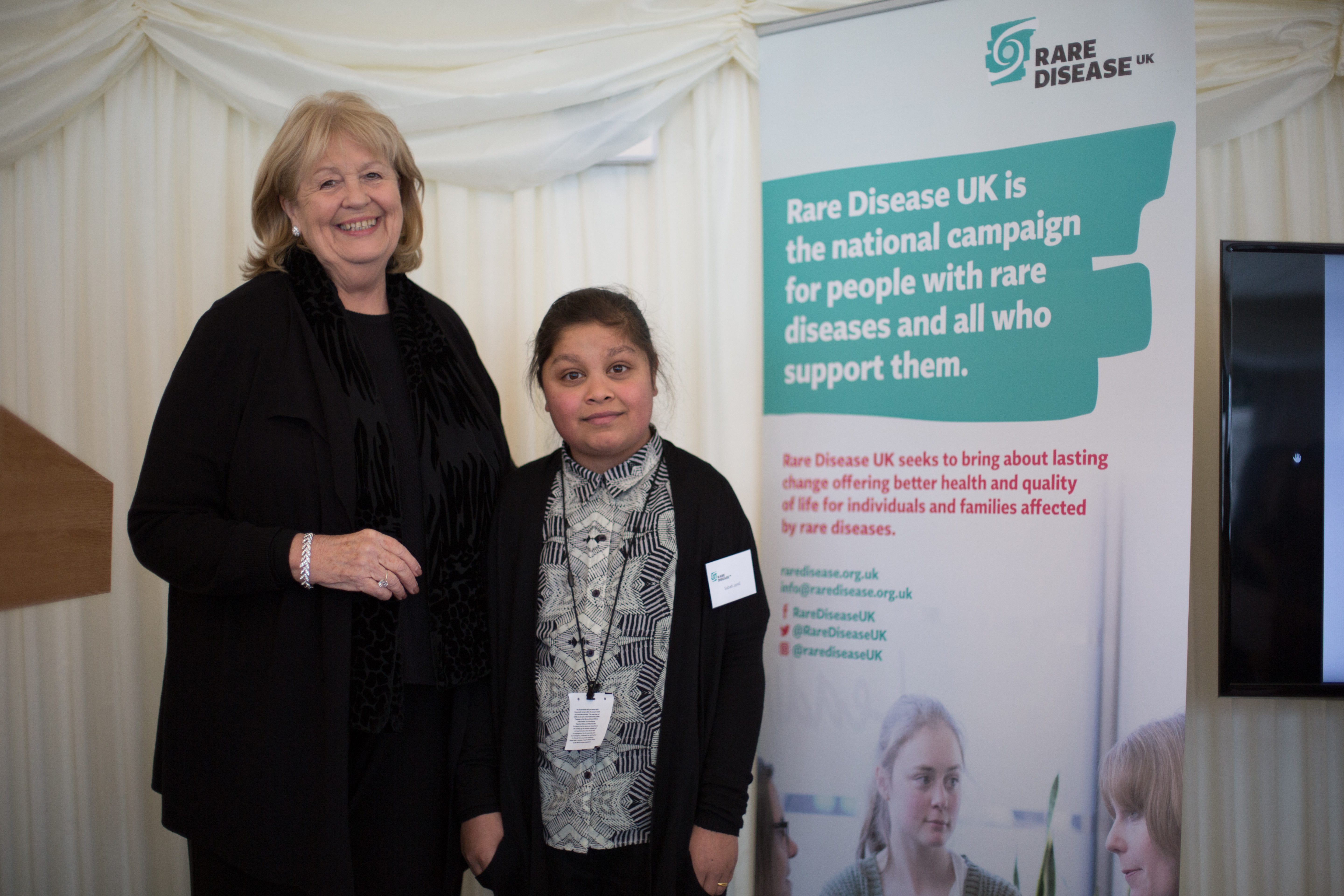 February has featured numerous other activities such as visiting Royal Holloway’s Rare Disease Day event to raise awareness of rare conditions to students and hosting four Twitter Takeovers. In addition to this, hundreds of people participated in our Instagram Challenge throughout February, joining in with daily themes and sharing their own photos. This gave patients and families affected by rare conditions to share their experiences through the wider community.

If you were unable to attend any of the receptions Twitter moments of the English, Scottish and Welsh receptions are all available.

PrevPreviousUnderstanding Children and Young People’s Experiences
NextLiving with a rare condition: the effect on mental health (2018)Next