Just because it can’t be seen, it doesn’t mean it’s not there

In 2002, I was 37 years old and had the most painful pins and needles in my left hand. I was tested and scanned for trapped nerves and carpal tunnel syndrome until an MRI scan revealed that I had a cavernoma at position C2-C3 in my spinal cord.

A cavernoma is a malformation of blood vessels that form a raspberry-like cluster and can either form in the brain or, more rarely, in the spinal cord.

As I had no other symptoms and the pins and needles had disappeared, I had yearly MRI scans to monitor the cavernoma, but no treatment. 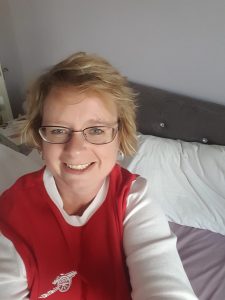 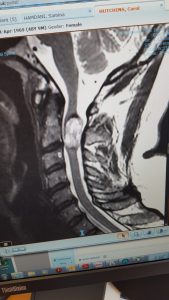 Fast-forward to 2019 and I am having problems with my walking and balance. My left arm ‘bounces’ rather than swings when walking. My left leg occasionally drags, which means that if I trip, I fall over and end up hitting the ground like a heavy sack of spuds because I don’t have the strength in my legs to steady myself. A few of these falls have resulted in trips to A&E for stitches. My thumb and forefinger seem to want to curl over as do a couple of my toes, again on my left hand and foot. On my right side I have a sensation of burning lava flowing along my arm under my skin. All this is due to my cavernoma’s size, as it almost fills the whole of the spinal cavity, damaging the nerves. I use a walking stick, which I hate, and I will have to move to a ground floor property as I struggle with the stairs. I will also have to  think about changing to an automatic car some time in the future.

At the moment, because of where my cavernoma is, it can’t be operated on as the risk of quadriplegia (paralysis) and the risk to life is extremely high. We also don’t want it to bleed as that’s a huge risk too. My cavernoma is possibly congenital (present from birth), but I only have one, which is positive. I don’t know what the future holds, which is quite a scary thing, but I have an upcoming appointment with a spinal cord specialist surgeon so who knows what technology will be available in the years to come.

Carol is 50 years old and lives in Hertfordshire, where she does pilates (or ‘bendy classes’ as she calls them) twice a week. She is a member of the Cavernoma Alliance UK Support Group.